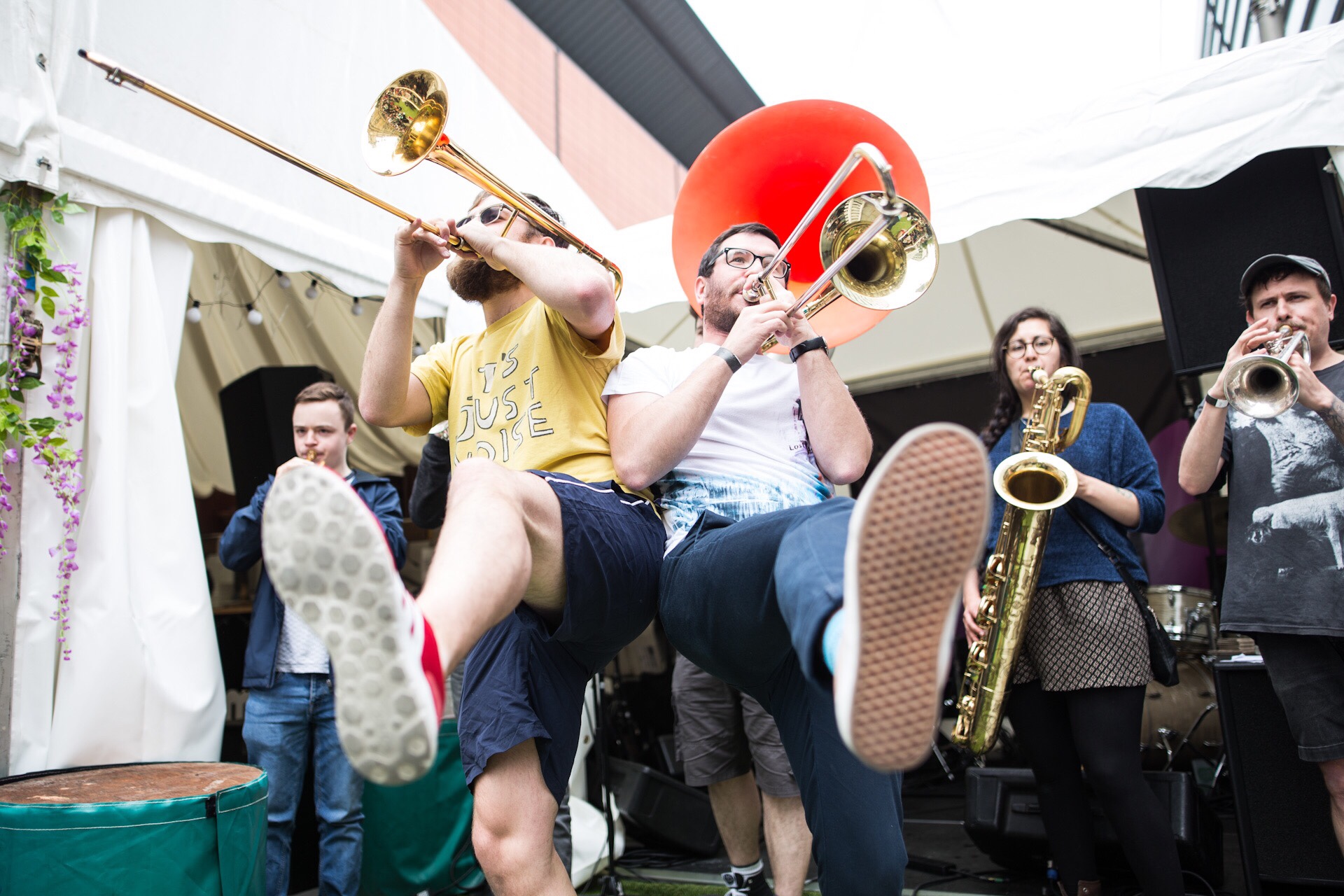 This year, I was one of the photographers for Manchester Jazz Festival. I wanted to do something a little different that was still music and jazz-related but not specifically dancing. It was certainly a very different experience to photographing a dance event.

I didn’t shoot that much — even less than intended due to the surprise of a venue demanding rights to my images as a condition of entry — I was a lot less busy than my 35+ hours of taking photos and editing that I do during a dance weekend, so I felt at a loose end a lot of the time. I don’t know whether that’s a good or bad thing though?!

I saw some bloody good music and some brilliant performers like this band, Young Pilgrims. They put on a right show and were just loving life. They were an absolute joy to photograph.

My friend Higgsy once told me he didn’t like jazz because ‘[he] once went to a bar and it was just people spitting in trumpets and a really weird vibe’. I never understood that until this festival. As much good music as I saw, I think I realised that I don’t like that weird arty jazz. I think being in the swing dance world has given me a bit of a pigeon-holed view of the genre. Seeing Pete Long, Gordon Webster or our local bands like Alligator Gumbo or the Red Canary Dance Band perform will always fill me with joy. I love the energy that those bands, and ones like Young Pilgrims, give off — but I’m not sure I can ever get on board with the 15 minute songs and bands that take themselves super seriously.

I was really impressed by the MSC Big Band — I had super-low expectations seeing it was a student group, but I was blown away by how tight their set was. I was also pretty impressed by just how many people they managed to get on one stage at once.

The lighting was really lovely at this venue too. Bloody love me some good stage lights.

I also managed to get some shots for one of the outside stages before it chucked it down.

A huge shout out to all the tech that weekend too. Tech are the unsung heroes of every event. They’re just in the background all the time but bad sound, lighting or stage management can really make or break an event.

I’m not really buzzing with this set of images — they’re OK. But, I also don’t know if that’s off the back of an ‘OK’ experience taking photos. I had an alright time, but like I said, it wasn’t really my vibe.

I would have loved to see a bit more local representation from the bands and DJs that I’ve supported for years. Manchester, and the North West in general, are abundant with really talented DJs and bands — but I guess it’s what I know and love, so I’ll always want to see them and be disappointed when I don’t. I’d really love it if Manchester Jazz Festival was a showcase of Manchester and Northern talent, and gives the bands and DJs that are out there slogging locally a platform to be seen by new audiences. But I guess every festival must make their choices and decide what they want from their event.

If you’re reading this and want to discover some of the local talent:

Both these lists could go on and on and on, seriously. There are some bloody talented people in this region.

This site uses Akismet to reduce spam. Learn how your comment data is processed.